Society, in itself, an imaginary construct, represents “transgressors of gender” as alien and hidden, given over to sex work as their natural and inevitable vocation, and punishing them by denying them any form of legitimate employment, going so far as to questioning their right to exist. Yet, Transgender identity and customs have always existed at various times and places in many cultures throughout the world. Westernization and its modern social norms however have devalued their lives, demonizing and very often persecuting them. This work sets out to shed a light upon the situation of the Transgender community in Italy, with particular attention to issues concerning employment. We shall also place an emphasis upon unresolved matters of discrimination and propose possible solutions. In doing so, we hope to uncover and reveal a hidden world, misunderstood by the media and even by political parties of the Left. 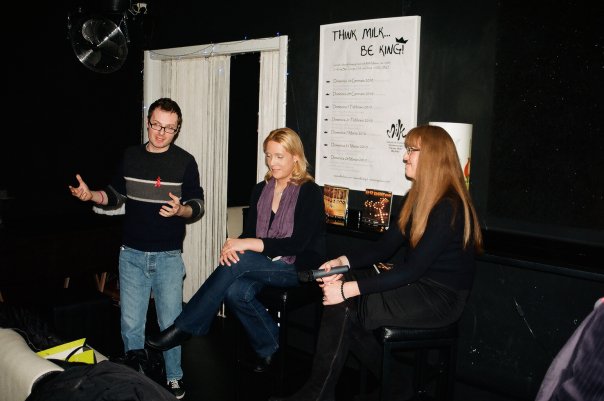 Presentation of the book “Diurna” at the association Harvey Milk Milano

“I spent the greater part of my childhood and adolescence asking myself questions. When you are a child, you don’t feel the need to define yourself. You simply “are,” that is, you exist. And you don’t understand the embarrassment in being around those you love. Finally, the day arrives when someone persuades you there must be something wrong with you. There are forms of physical expression, speaking and playing to which you must adhere. I assumed that my own gender identity was clearly visible and perceived impartially by others. Gendered gestures, spoken words, and facial appearance defined who I was. As you grow up, you become aware that there are BOYS, GIRLS and… yourself. When you realize that your friends and companions are not laughing WITH you, but rather AT you, all the while enduring insults, discomfort and harassment. So you begin to ask yourself questions: in the answers there can be the meaning of one life.

The attempt to provide an interpretation to the profound sense of isolation and fear which encompasses you, means choose if think of oneself as a “mistake,” a freak of nature for the remainder of your life, or scrutinize the surrounding environment and summon up the courage to interpret the normative culture to which you have been condemned.

In my own case, activism became the beginning of my search. In this way, I hoped to give significance to my life experiences, choosing to employ my energy on behalf of those who share my challenges; namely, transgender individuals, particularly in Italy. Ten years ago, when I was 20 years old, I matriculated in the department of Political Science in Milan and began to dedicate my free time in voluntary service and support on behalf of those individuals who defined themselves as “Transgender.” At age 23, I established the Milanese branch of the National Association, “Crisalide Azione Trans Onlus,” for which organization I was responsible until December 2007, with the clear intention of providing life assistance in a concrete way, to all Transgender individuals in Lombardy.

In such an environment, there could arise a group of mutual assistance, a truly safe place where it was possible to exchange experiences, opinions, ideas and private emotions. Our meetings eventually progressed beyond the activities of the association itself and led to dinners, various trips, telephone chats, debates, and even attending cultural events. I can confidently state that after five years of group meetings and activities in the Milan headquarters, accompanied by an awareness of both political and cultural issues, there spontaneously arose an authentic and genuine Transgender community. During those five years, we saw hundreds of individuals, with their own, unique experiences and emotions. Indeed, within this safe environment, they were able to safely express those opinions and feelings which are completely devalued by a society which expresses nothing but hostility in regard to variations in gender.

It is extremely difficult to survive in a system which pathologizes you, providing you with no legal recourse, which grants legitimacy to a heteronormative construct, and which, finally, portrays all transgressors of gender as alien and tabooed objects, devoted to sex-work and criminal activity as their only possible means of employment; “out of control,” “perverse,” “without dignity;” which also fashions an unwritten law which criminalizes every aspect of our lives, again, giving many of us no alternative except doing sex-work.

It is difficult not to internalize this feeling of devaluation which often follows us from infancy, especially when the oppressive demands of gender normativity bring about difficulties within the family and at school.

It is difficult to seek a safe space in a society which outlaws your very existence, nullifying the most authentic part of one’s being, that very part which you have inherited and NOT chosen; namely: Gender.

The term, “transgender” echoes that existential state which W.E.B. Du Bois calls the “double consciousness.” This arises when an individual discovers that his/her essence is defined by two different cultures: the dominant culture which has been more or less internalized, and the subordinate culture of one’s own particular group.  Culturally oppressed groups are often segregated and placed in various social ghettos which allow them to form and elaborate their own, unique culture. In a similar way, Transgender individuals have begun to create their own style of living and expression. Thus, Transgender people have begun to create their own, unique counter-cultures, and, in turn, formulate a positive view of themselves.  They can now formulate public expressions of Transgender culture in order to oppose the dominant culture, claiming recognition of their own appropriate specificity and subverting all common stereotypes.”